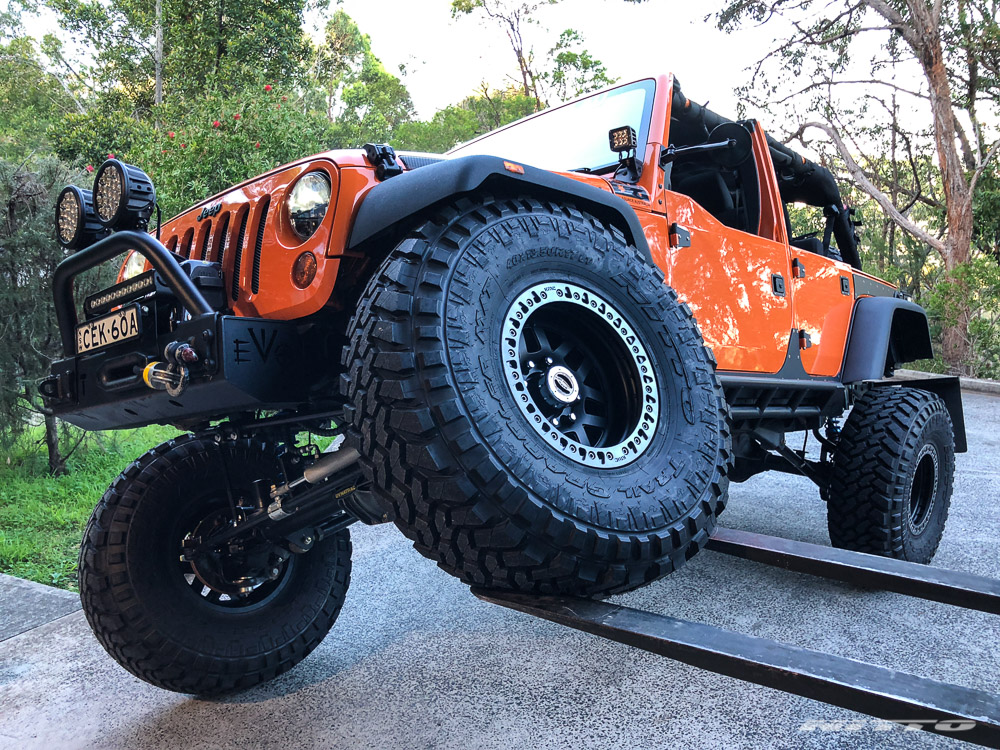 As you edge closer to the extremities of automotive modification, form often takes a back seat to function in the pursuit of performance and seat time. This is a trade-off that most find easy to justify but not George Sadlik, a man with a penchant for perfection who envisioned the best JK Jeep Wrangler Rubicon that Australia had ever seen and turned that dream into reality with his own two hands. 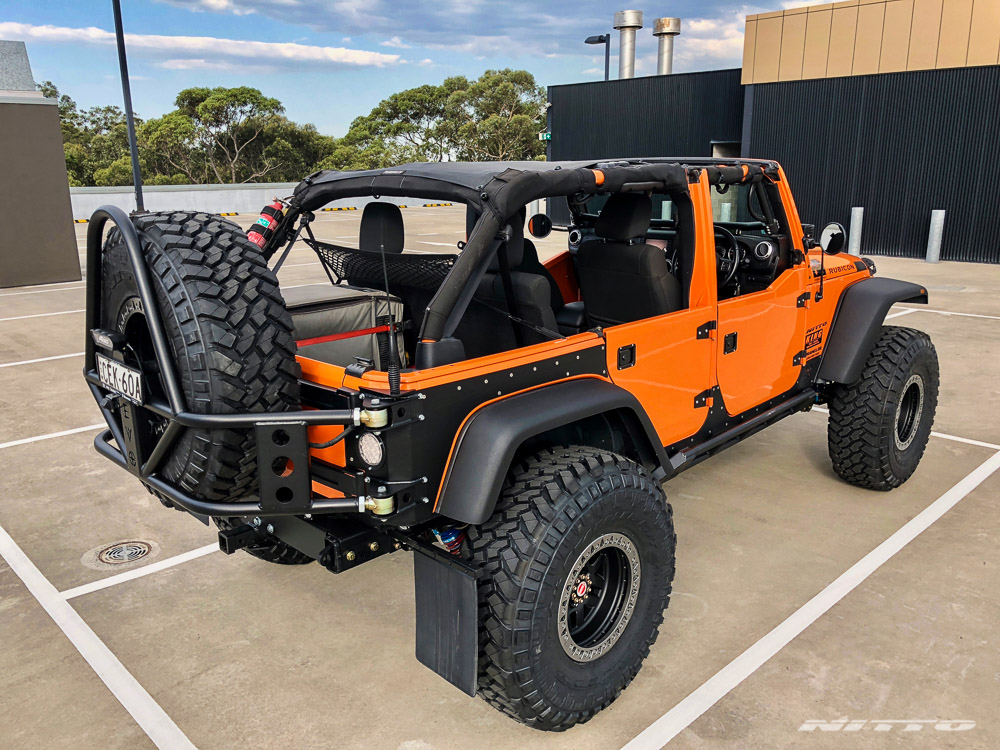 “After watching videos of Jeeps in the States running crazy trails, I knew that owning a Jeep was for me,” George begins. “I had a Land Rover Discovery at the time that slowly became more and more extreme but I realised that maybe we were building the wrong 4x4, so that made way for an Orange Crush JK that was purchased new in February 2012. From there, JK Source was born, an outlet that documents the build of my Jeep from mild to wild while focusing on all things to do with the JK model Jeep Wrangler and sharing any tips learned along the way.” 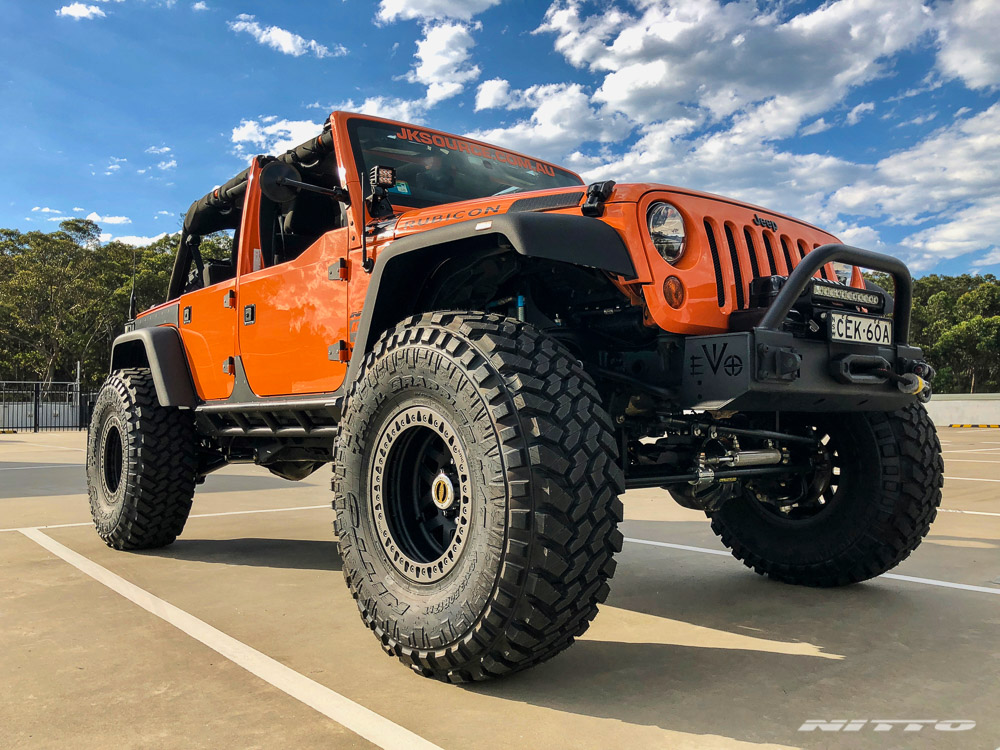 “Most people throw a lift and some big tyres at their 4x4 then find themselves forever chasing issues,” George states with authority, giving insight into the attitude that fuelled his uncompromising approach. “This wasn’t my first build and I knew exactly where it was headed right from the start, from bulletproof under-body components to top-notch accessories and even the right rubber to put it all to the ground.” 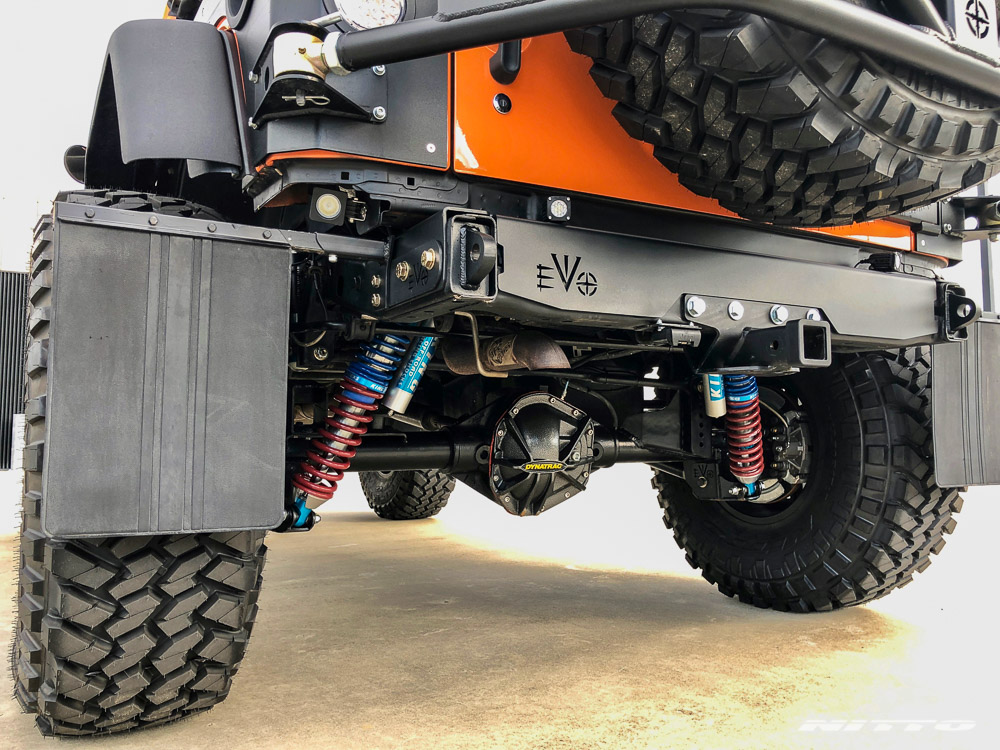 Sticky-compound 40x13.50R17 Nitto Trail Grappler M/Ts are a damned serious tyre that look right at home on 17x9 -38 KMC XD Machete beadlocks but there are plenty of other components under this Jeep that wouldn’t be out of place at motorsport events like King of the Hammers. Front and rear Dynatrac ProRock 60 differentials fed by J.E. Reel 1350 Canyon Crawler drive shafts and loaded with 35-spline chromoly axles that slot into ARB air locker centres make for a bulletproof drivetrain while Eibach springs fitted to a King Off-Road Racing Shocks kit developed for Off Road Evolution and tuned to Aussie conditions by Mike’s Shock Shop, a TeraFlex long arm kit and full PSC Motorsport hydraulic assisted steering system keep it all under control. 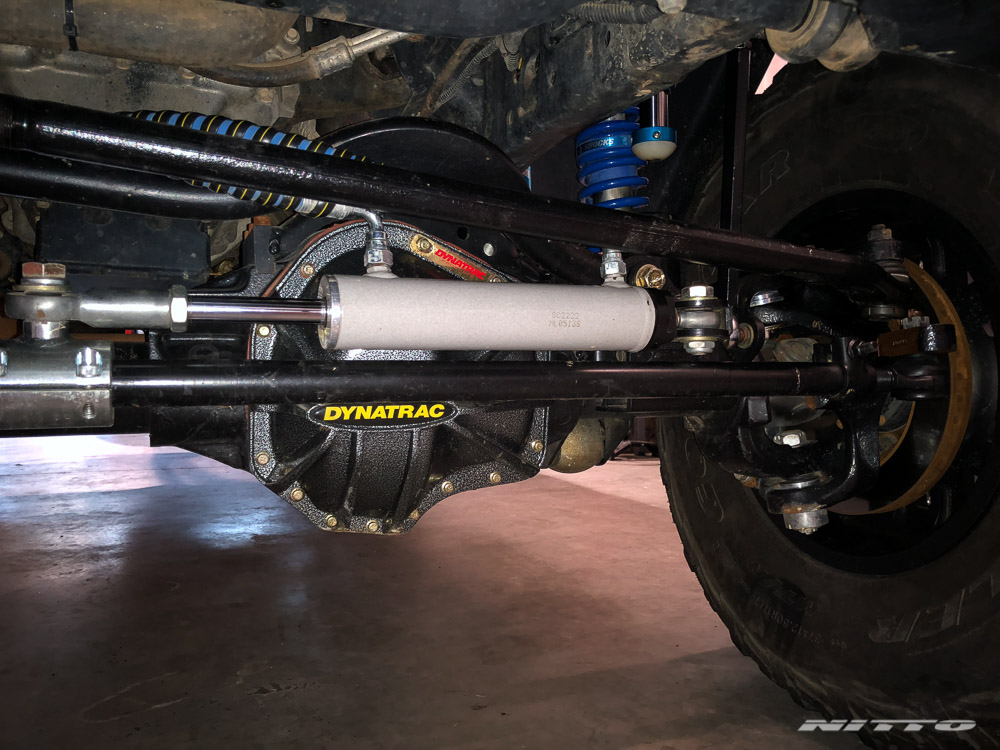 “Jeeps have great aftermarket support, especially the JK, and I think one of their biggest strengths is the way you can increase their capability without raising their centre of gravity too much,” muses George. “This thing has 12-inches of vertical suspension travel and fits a 40-inch tyre but is still only just taller than 2 metres at the roof line and even less when running 37s on the street. That gives it a really low centre of gravity that feels unreal over steep terrain off-road while driving nicely on sealed roads too. But I’d be lying if I said I didn’t enjoy the looks of terror from people as I cruise towards them in 2.1 metre clearance car parks knowing that I’ll easily squeeze in.” 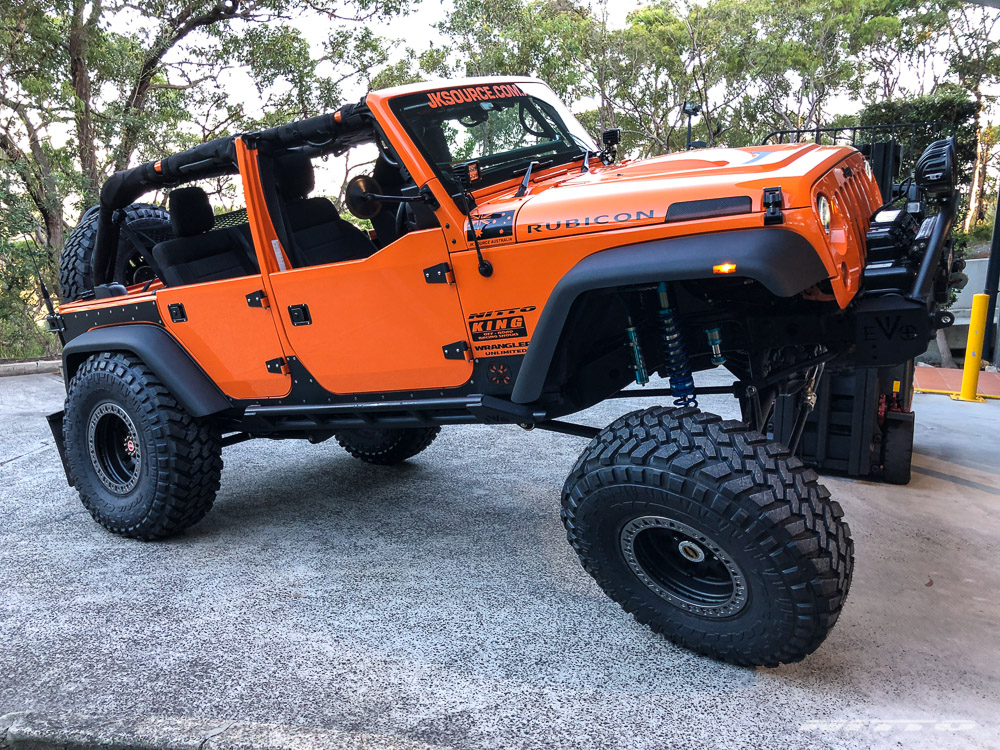 Such comprehensive aftermarket support is just as apparent on the outside as it is underneath, with Off Road Evolution bar work, panel skins and a tyre carrier joining their coilover kit along with JCR Offroad half doors, Trail Mods removable fenders and a Rock Hard 4x4 sports cage to create a tidy yet extremely purposeful demeanour, with the majority of these goodies supplied by SBR Off-Road, Australia’s premier aftermarket Jeep parts supplier. 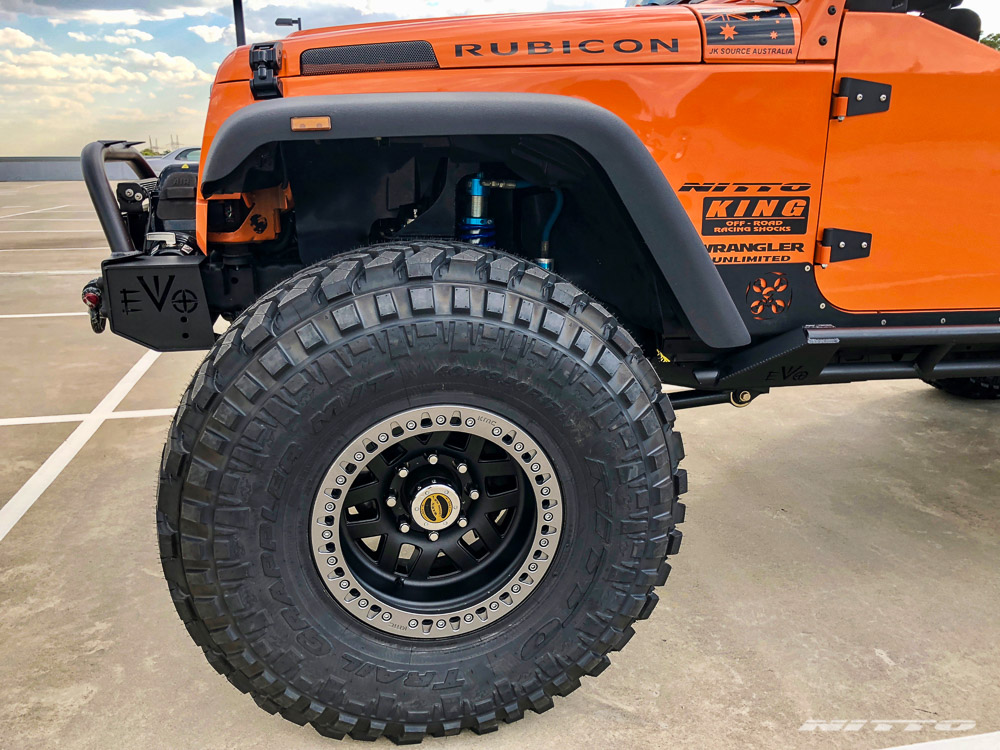 Combining every Jeep nerds’ Christmas list in a carefully-considered package has seen George create a truly one-of-a-kind Wrangler that has loyal JK Source fans in a constant state of salivation, ourselves included, but don’t for a second think that this thing won’t be getting dirty! 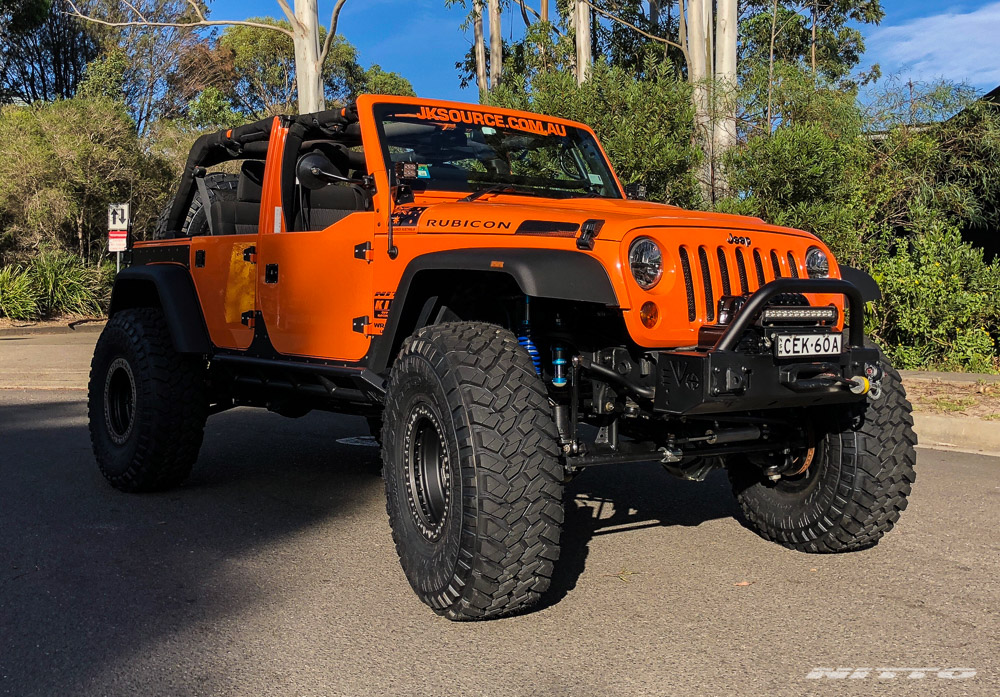 George is just as eager as we are to see his sticky KOH-spec 40x13.50R17 Trail Grappler M/Ts put to work on some tough Aussie trails, so stay tuned!